These twins do vibrate a bit, despite the best effort of the balancer.  And the stock grips that came with my 750’s were firm, with almost no vibration absorption.

After trying a few different kinds of replacement grips, I’ve come to like two in particular.  These are, in my opinion, the best blend/compromise of comfort, appearance, and affordability (in that order).

1.) This old-school grip is an OEM replacement style grip from the KZ400 and a few others.  I like how the little rubber “fins” keep your hands isolated from the buzzing on the 400.  I’ve never tried them on the 750, but I bet they’d be great.  I have read where some people dislike them because they lose some “feel” of the throttle, but I’m no racer after all…  Here’s a picture of the stock 400 grip: 2.) But as much as I like that that old OEM style grip, my favorite for the 750 is: ProGrip Custom Style 860 grip.  I get them from Dennis Kirk, but they are available from alot of places.  I now have them on both of my 750’s.  They have a nice style, a good feel, and they isolate vibrations without being too squishy.  A caveat though:  after a few riding seasons of heavy use, the foam on my grips was pretty much flattened out, losing most of the absorption and comfort, and requiring replacement.  This is not a big deal, since they are only $10 or so…  Another interesting facet of these grips is that I was able to remove the foam over the late Autumn and early Spring seasons when I use my Oxford Hot Hands Heated Wrap-Over Grips grip warmers, in order to keep the over-all grip thickness down, but that is another post.  UPDATE:  This can be tough to install, because they are a tight fit (see comments below).  But you *can* get them on all the way if you use a good slippery solution and use lots of force (but be careful not to break the plastic tips off!). 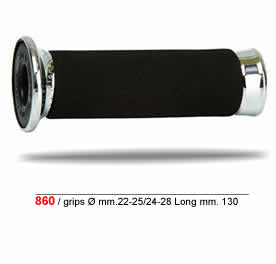 3.) Update, July 2015: Since about mid-2013, I’ve been running the Grab-On MC315 CLAS DLX CHR 6X7/8″ grip on my #2 750… and as I write this in mid-2015, I’m amazed that they are still holding up perfectly, and the foam on the ProGrip 860’s on bike #3 has just about lost it’s absorption. When I first installed these Grab-Ons, I thought they were as thick as tree limbs and were going to be uncomfortable. But they were easy to install, perfect size and fit, hold up well, and in the end, the thickness grew on me since they do absorb vibration very well. I originally bought them from Babbit’s on a sale, but now I’ve found them on eBay for around $28 shipped. 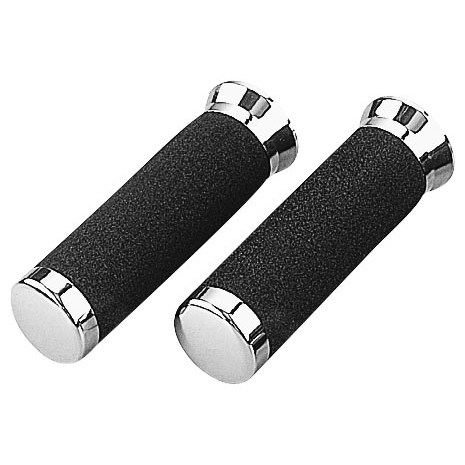