Ah, oil… perhaps one of the most heated topics in the motorcycle forums.

My main oil for my KZ750 is Shell Rotella T big jug (though I have been known to thrown in a jug of GTX once in a while).  I use the 15w-40, and as I live in the northern mid-west of the US, I ride only at 32F and above.  If I ever start riding in colder weather, I might switch to the 5w-40 synthetic.  Warmer areas can consider 20w50.  Straight-weight oils generate so much debate that I have decided to avoid them altogether, given the availability of alternatives.

I change my bike’s oil at 1500-2000 mile intervals!  Bikes that share the transmission with the clutch and the… well, the rest of the engine, break down viscosity quickly.  Since it’s only around $13 per gallon, everyone can afford it…

But one of the most important points of all is this:  avoid oil with so-called “enhancements” or “friction modifiers”.  These ingredients can make you clutch slip, and you’ll be wondering why your bike won’t move… 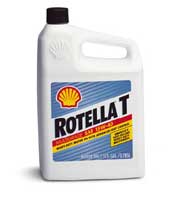