Both of my KZ750 twin starter clutches have failed.  One dramatically, one silently.  They sure do seem to be prone to it…

The starter clutch exploded and seized my engine on my “first” 750 twin first.  I was riding along at about 30mph in town when the engine just rapidly seized and the back wheel locked up.  I got a handful of clutch and rolled to the side of the road.  I pushed the bike home, pissed off.  A week later I got around to checking out why…

It had automatically backed 1 of the 3 mounting allen screws/bolts out (the other two were already loose too), dropped a roller out, jammed against the starter sprocket or something and cracked in half.  I was lucky it wasn’t worse. 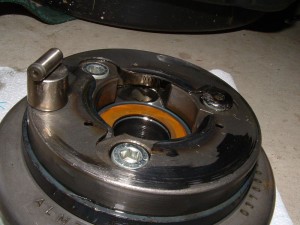 This is immediately after removing the assembly from the seized engine. Note the melted screw head at top right. All 3 screws were loose and backing out. The pin and roller had freed themselves and wedged somewhere between the assembly, the starter sprocket and the engine case to cause the engine seizure. 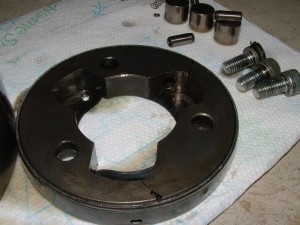 Now from the other side, I hope you notice the housing cracked in half, the missing metal chip (hole in housing in foreground) I recovered (in background).

I just pulled the rotor, removed all the debris, got a replacement starter clutch from a spare KZ400 engine, removed all the pins, springs and rollers (only kickstart now), and reinstalled the *housing* only with RED Locktite on the 3 screws.  So the final difference from stock is that it’s just missing pins, springs, and rollers.  When you push the starter button, it just goes “Wheeee…”

Since I did this bike’s repair first, I naively thought I needed the housing as a spacer (of course, if I had it to do over, I would have left the housing out).  More on that below…

So, shortly after, I was working on my *other* 750 twin;  because I swore I would pull the rotor to examine the state of the starter clutch before that thing saw the road that season.

This time, after I pulled the rotor off, I was looking at what looked like the backside of a starter clutch, still on the starter sprocket.  Lo and behold, it *was* the starter clutch.  The three bolts that mount the starter clutch *to* the rotor had ALL sheared cleanly, separating it from the rotor.  No shattering, no other damage, just a completely free-floating starter clutch. It looks like one of the three bolts was a little worn like it had been grinding like my other bike, but only a little.  I’m sure this would have caused damage in the future…  So I had to get the little bolt bits out of my rotor… 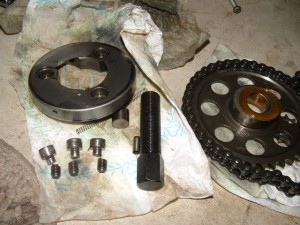 This is where all 3 screws were sheared, and the starter clutch was effectively free-floating in there. How long before one of the screw pieces got free and made it's way toward the crank? Fortunately, we will not find out.

For this bike, I left out the *complete* starter clutch assembly.  This is because (as I mentioned above) I later realized that I do not need the housing as a spacer, but I *do* need the starter sprockets and chain to hold the sprocket steady while running.

Now, all is well.  And I can kick start them forever now.  But do the pics make you cringe?

So is everyone going to go get a gasket (or make your own), a rotor puller (or rear axle), and check them out?

On a related note… If you decide to repair rather than remove, it appears as though Parts N More offers a starter clutch rebuild kit (though I’ve never bought anything from them myself).

Sorry if I sound like an evangelist, folks.  But my engine seizing – even at relatively low speed – might have been my scariest moment in my brief motorcycle history…
😉

UPDATE, 20120602:  In the recent days I have removed the starter sprocket and chain from 750 #1.  I thought I was hearing a noise in there, and decided to take the cover off and inspect the start clutch bolts and such, just-in-case.  Given my past experience, I didn’t want to risk it.  I found that everything was as I left it, even after thousands of miles.  So I re-assembled, leaving the sprocket on the crank in place (to keep pressure against the oil journal in the crank), along with the starter clutch housing and 3 bolts (without pins, springs, and rollers of course).  I would have taken the start clutch housing off too, if I had a working torch on hand; I used red Loctite and the 3 bolts wouldn’t come out… Ironic, don’t you think?  😉